The Biggest Waves ever!

On 29th of October 2020 the waves generated by Hurricane Epsilon hit the coast of Portugal. It was the biggest and cleanest swell ever recorded. The big wave community gathered at Nazaré to surf massive mountains of water. Amongst them Kai Lenny, Lucas Chianca “Chumbo”, Nic von Rupp, Andrew Cotton, Justine Dupont, Maya Gabeira & Sebastian Steudtner.

The enormous size of the waves makes it really hard or even impossible to paddle into. Thus the athletes gather in teams of 2, a surfer and a Jetski rider. The Jetski pulls the rider into the big waves and is also responsible for the pick up after the wave ride is finished or even worse after a wipeout. Both persons in the team surf and ride Jetskis.

The Jetski drivers are in contact with scouts on land who give them information about the surfer’s position. This is crucial for the pick up or can save lives in case of a wipe out. Of course safety is the main focus of all athletes and therefore the teams help each other in case of harsh situations.

Must be an intense feeling: sitting on a Jetski and waiting that you friend appears after catching a massive mountain of water.

Who rode the biggest wave that day is still in the measuring process. So far Lucas Chianca “Chumbo” and Andrew Cotton are the best bets for a new record. Fingers crossed.

At the end of the day lots of waves were surfed and nobody was harmed. 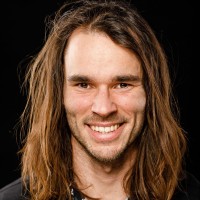 Hi, this is a comment.
To delete a comment, just log in and view the post's comments. There you will have the option to edit or delete them.